On June 4, 2010, the 4th Dutch Library2.0 Happe.Ning event took place in Haarlem. This is a kind of un-conference that is un-organised by different groups of members of the Dutch library 2.0 online social network Bibliotheek2.0.
This time the Happe.Ning was un-organised by people from my hometown Haarlem: Wilma, Jan, Peter, Ad, Janneke, Erik-Jan and myself. We work for a number of different organisations in the library and information area. The funny thing is that, as Jan pointed out, we probably would never have met in the first place without the Bibliotheek2.0 and twitter social networks.

The 2010 event was aimed at giving participants hands-on experience with a number of web2.0 applications that are interesting for libraries: videoblogging, mobile location aware services, Twitter, Foursquare, focusing on the central theme: the old story that printing was invented around 1430 in Haarlem by Lourens Janszoon Coster, and not by Gutenberg. Historians now say that Coster never even existed! This became the secondary theme of this un-conference: information and truth. How can you know that information is valid, but also: does it always matter?

After the introductory session with coffee, tea, cake and cookies the participants went out on the streets of the old medieval town in small groups, with their own assignments: videoblogging, finding historical Coster related objects and photographing them, or tracking a virtual/real life Coster through Twitter/Foursquare.

My own part in this was to play the role of Coster (my last name being Koster) and check in on Foursquare at a number of historical locations. For this purpose we had created a Foursquare account ‘Lourens Janszoon Coster’ and a linked Twitter account ‘ljcoster1’. 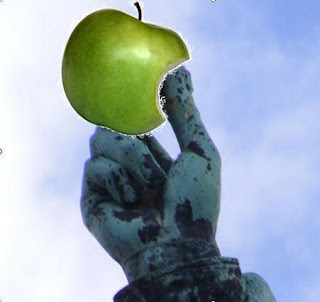 But during my field trip through Haarlem the large degree to which web 2.0 is dependent on the techological infrastructure made itself very clear: I just did not have a mobile internet connection on my smartphone, due to the T-Mobile network capacity problems in The Netherlands at the time. My smartphone was nothing more than a dumb phone.
But what to do to save the day and not let the participants wander aimlessly around, waiting for guidance?
Fortunately, there was a workaround. After going back to our HQ it became clear that you don’t have to actually be at the location you sign in for on Foursquare. You can just do it from a laptop or pc via a client like Tweetdeck that allows you to set a different geolocation and check in from there, even if you are somewhere else completely. So that’s what I did. I just conveniently checked in to a number of Foursquare locations sitting on a chair in our HQ. After entering the final location (Coster’s alleged residence and/or place of birth of printing, now a pub) all I had to do was to rush over there and sit down enjoying a nice glass of beer, waiting for the participants to find me.

This incident illustrated even more the fact that on the web it is very hard to judge the reliability of information. This, and the technological problems, were part of the end of the day’s evaluation. Of course there were also positive experiences. All gathered information will be mashed together in the event’s website as soon as possible.